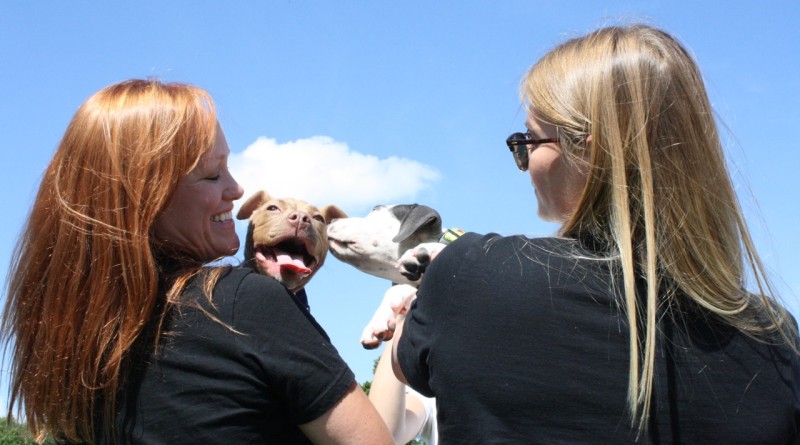 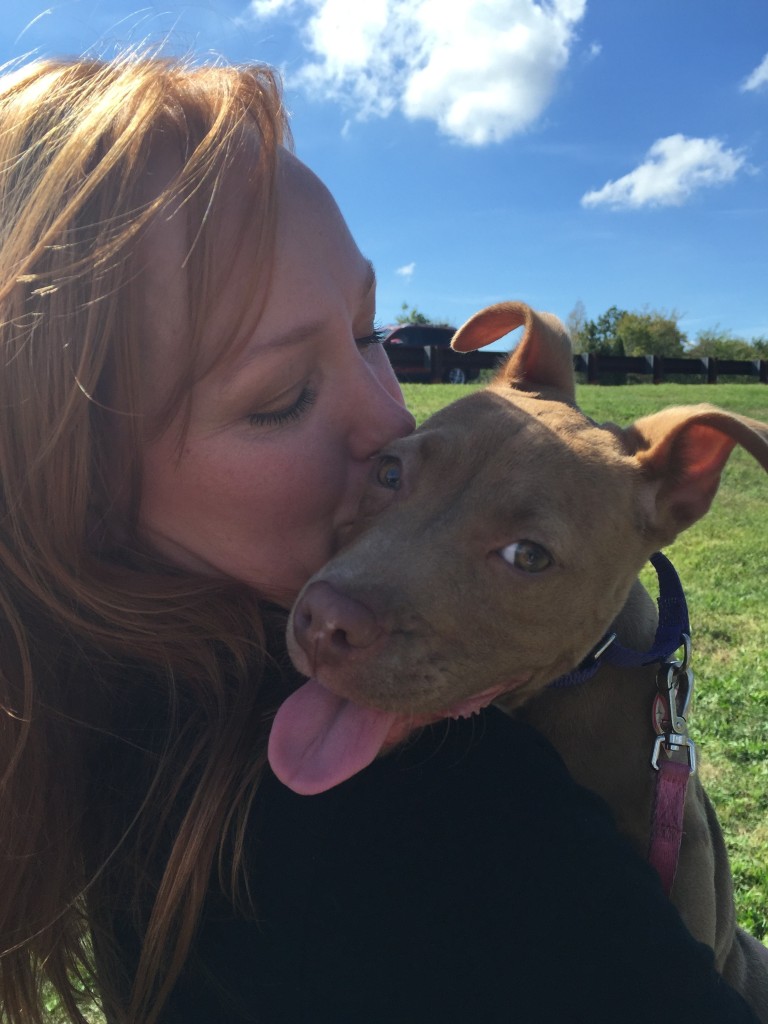 The Dogly team was extremely lucky to meet the wonderful people behind Mr. Bones & Co. and follow them as they rescued two pit bull puppies named Carolina and Charlie.  This is the story of the founder, Elli.

When Elli was young she was attacked by two dogs left unattended in a neighbor’s yard, an easy and understandable way for anyone to see themselves as ‘not a dog person’ for the rest of their lives.  Not Elli, though.  Five years ago she woke up one morning after being out too late with her friends the night before and decided, “something needs to change, I’m going to adopt a dog.”

Through the power of location-based services and Google, Elli found Animal Haven who just so happened to have a litter of puppies named after her all-time favorite book growing up, Charlotte’s Web.  There were two puppies left, Templeton and Charlotte. After meeting Charlotte, the runt of the litter, Elli knew it was a sign.  She knew they were meant to be female runts of their own litter together.

Three months after adopting Charlotte, Elli met a man at the dog run.  They fell in love, moved in together, got engaged but their dogs ended up bonding more than the humans and they called off the wedding. Charlotte was devastated. Elli wanted to find a friend for Charlotte and decided to foster.  She saw a “giant, friendly, smiley dog” on the ACC’s website and decided he was it.  When she arrived in Brooklyn, she was given a six-year-old emaciated pit bull type dog named Danny with canine influenza and 14 shattered teeth. 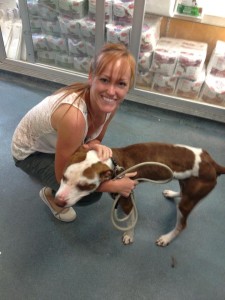 Having no experience with pit bulls type dogs at that point and only hearing the negative things the media says about them, she had a choice.  She could either succumb to the media stereotypes or educate herself. As a champion for the underdog, Elli chose the latter and was determined to show the world they were wrong about this ‘type’ of dog.  It didn’t take her very long to fall in love with Danny and after two days he became a permanent part of her family. 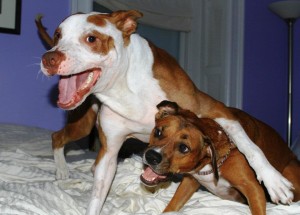 As Danny, immediately renamed Mr. Bones, started feeling better, Elli began to notice he had a lot of fear-based reactivity, especially around some men and other larger dogs.  To help him deal with these issues she enrolled him in rally classes, course work for dogs that teaches them to constantly check in with you.  Mr. Bones will always be her “work in progress” but they both now have the tools and understanding of the optimal environments for him to be in and what he needs to be at his best. 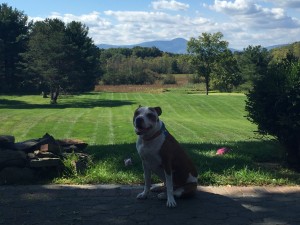 Six months after she rescued Mr. Bones, he had changed her life.  As more of his past became evident and he fought to overcome it, Elli wanted to be better too and make change in the world. For her that meant launching a big event called Rescue The Runway which of course led to the start of Mr. Bones & Co. and meeting her Co-Executive Director, Marisa.

With the money she saved from canceling her wedding, Elli was able to buy a farm in upstate New York where she could bring the foster puppies of Mr. Bones & Co. “I bought this place for my life with dogs. I was fortunate enough to save for a wedding that didn’t happen and I suddenly had the ability to make a down payment. Most of our dogs can’t go to the dog run in the city so this farm is all for them.”  And it was only fitting that the farm be named Charlotte’s Run, after Charlotte, since after all, Mr. Bones got the rescue group. 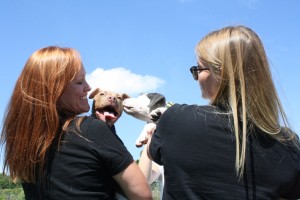 A closing thought from Elli…

“When people say with pit bulls ‘it’s how you raise them,’ this is not a fair statement.  Mr. Bones was not raised to trust people, or be gentle and listen, but after working regularly with him, over time, he has become loyal, trusting and calmer. When he is being too mouthy, one of his command words is ‘gentle.’ He understands this and changes his behavior immediately. I doubt ‘gentle’ was ever a word his former owner(s) would ever have used with him.  Saying that these dogs become who they are because of their past is wrong and only adds to the deadly stigma that keeps pit bulls sitting in shelters, unadopted and at risk of euthanasia. Every dog is an individual, just like any person.  We have to start treating them as their own and not a group, or breed and lumping them into categories.”

Mr. Bones & Co’s most recent rescued Lovabull is Bruce.  He was brought in as a stray to the city shelter who put out two urgent pleas to city-sanctioned New Hope rescues, like Mr. Bones & Co., stating that he had a fractured femur and was unable to walk. Mr. Bones & Co. stepped up to save Bruce and they were shocked when they saw him. He was emaciated and actually had multiple fractures. The more time they spent with Bruce the more evident it became that he had been suffering for a while. X-rays revealed femoral fractures in both hind legs, the left being older, the right having been broken within the last week, as well as multiple rib fractures of varying ages. Their orthopedic specialists decided to operate on Bruce’s right femur immediately to save the leg. With the first surgery behind them now, the care plan is to stabilize his right leg and then focus on the left leg, which will likely be amputated due to the age and severity of the fracture.  To read more about Bruce’s story and donate to his care please click here. 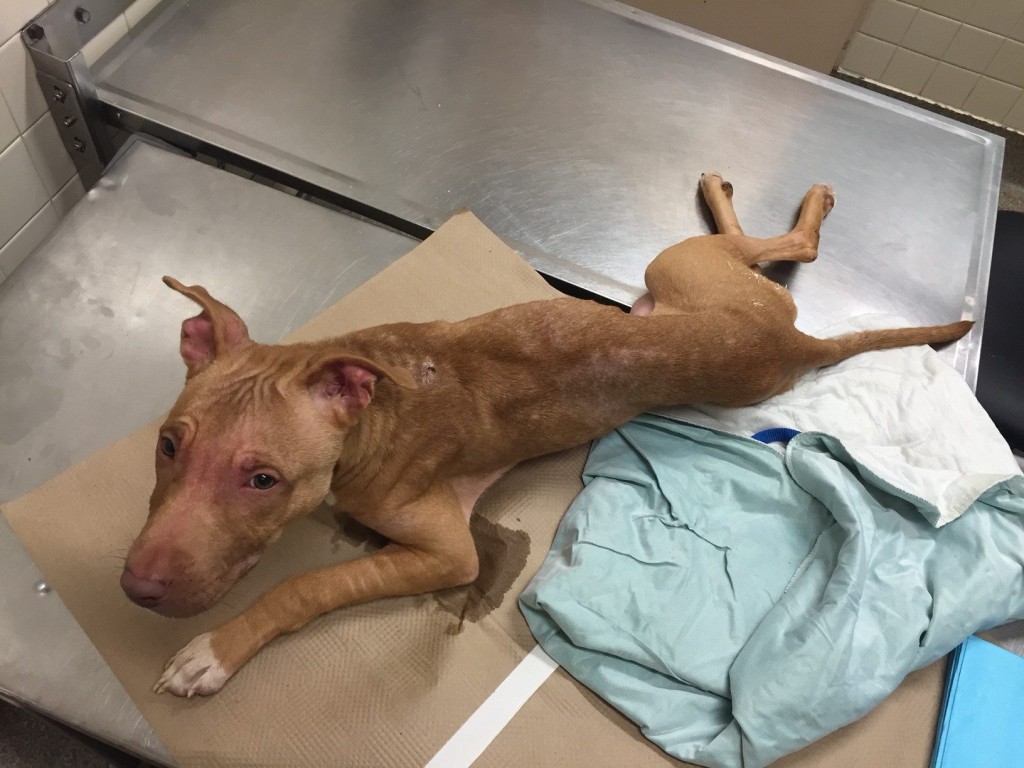 Download Dogly on iOS or Android to support your favorite shelter with every photo.  Dogly is connected to more than 10,000 shelters across the US and donates $3,000 every month just for posting and loving photos on the app!  Check out dogly.com for more info and @beingdogly.

Play a role in creating a brighter future for all misunderstood breeds by submitting your Lovabull Pit Bull photos and stories HERE and receive a chance to be featured on @pitbullinstagram. CLICK HERE to share now!