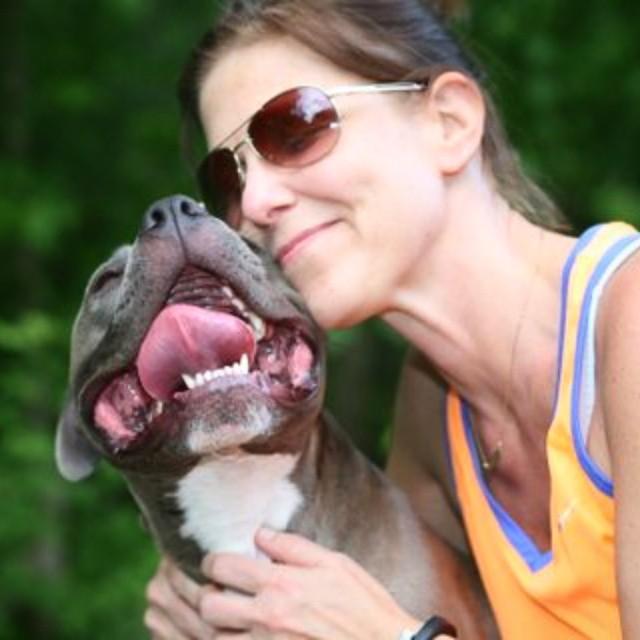 This is Olive! And the story of Olive starts way before Olive herself. If you like her story, be sure to share it with the world. 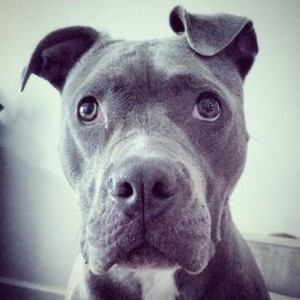 In March 2014, our 12.5 year old lovabull, a red-nose pit named Frances, passed away after a short illness. Frances was an amazing, special dog, and well known (famous, really) for many things, including the sweetest and most patient temperament of any living being; her impressive lack of energy; and her boundless capacity to love. She was, quite frankly, the best dog ever, and when she died, our hearts were broken.

The last week of her life, visitors and gifts poured in like she was royalty. Family, friends, neighbors called to see if they could come by. Everyone wanted to be the one to bring a treat that she’d want to eat. Everyone held her, everyone cried as they left. People in the neighborhood still miss her, still ask about her, still recall stories of her queenly walks, graciously pausing to let her fans come pet her and have photos taken with her. We thought we’d likely never get another dog; it wouldn’t be fair, because who could possibly compare to Frances? …

Fast forward not very long, we were still in mourning when I got a message from a friend and former colleague who happens to also be a wonderful dog trainer and advocate. One of her trainers was fostering a young bluenose pit who’d been saved by the neighbors of a man who was going to “take care of it” after she was born under his porch. Of course, since she was very obviously a pitbull, they worried she’d never find her forever home. We weren’t ready, I said, and I secretly still thought we never would be. But my friend knew me well, and a few weeks later sent one more note – this time with a picture. 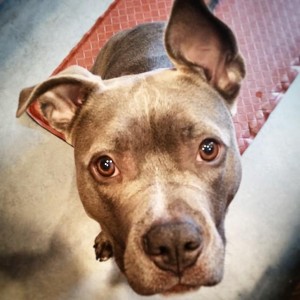 My heart twinged a bit, but we weren’t ready, I said. A few days later, my husband Steve asked out of the blue what it would take for us to “just meet her maybe?” … So her awesome foster mom drove her two hours for a meet and greet, which led to a trial weekend.

That was May 9, 2014 and thus far, the “weekend” has been a huge success! We thought no dog would ever fill our hearts like Frances, but now I think Fran sent her our way, knowing that we needed her and that Olive could continue her role as ambassador for all lovabulls everywhere. 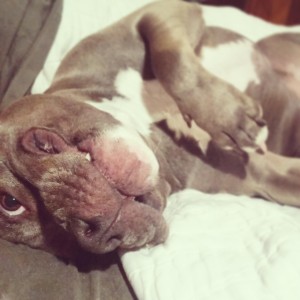 Olive and her quirky ears quickly won over the family, our friends, the neighbors, and every stranger who’s met her – one smooch at a time. So now she can be found showing off her Canine Good Citizen skills, playing Frisbee or learning to skateboard (my husband is out of control).

It’s so frustrating that those of us who know what joy they bring to our lives have to constantly defend not only pitbulls, but the people who love them, too. I’ve learned, though, that just a few minutes in the presence of a sweet, funny lovabull who wants nothing more than to curl up like a potato bug in your lap can do what all our words often can’t – and so now I love it when people ask “what kind of dog is that?” 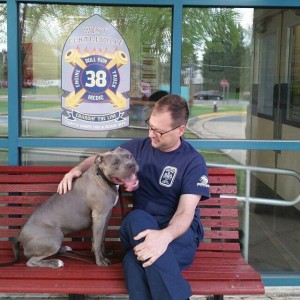 That’s my favorite part of having a lovabull in the family: watching people’s prejudices start to melt away after meeting her. We have lots of ideas about how to get the word out and win people over (“a pit bull in every nursing home!”), but we’re starting small and just letting anyone who asks give Olive a hug. <3 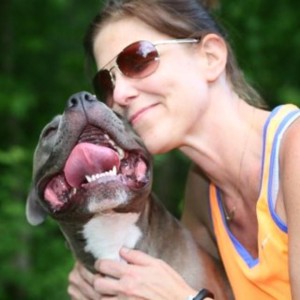 P.S. If you liked getting to know Olive, don’t forget to share her story with the world!