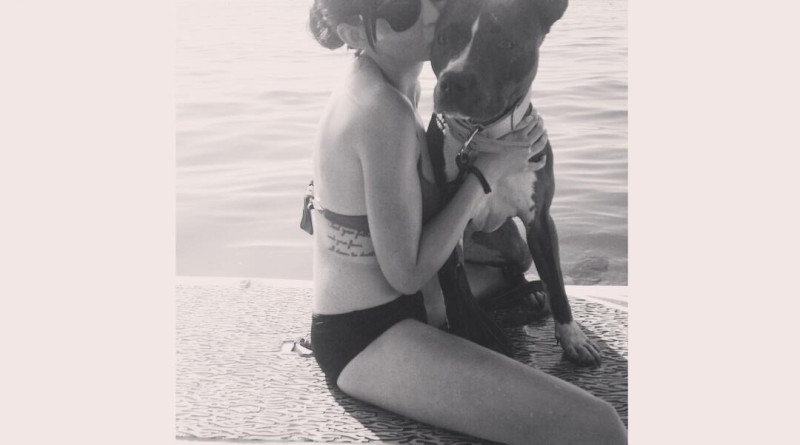 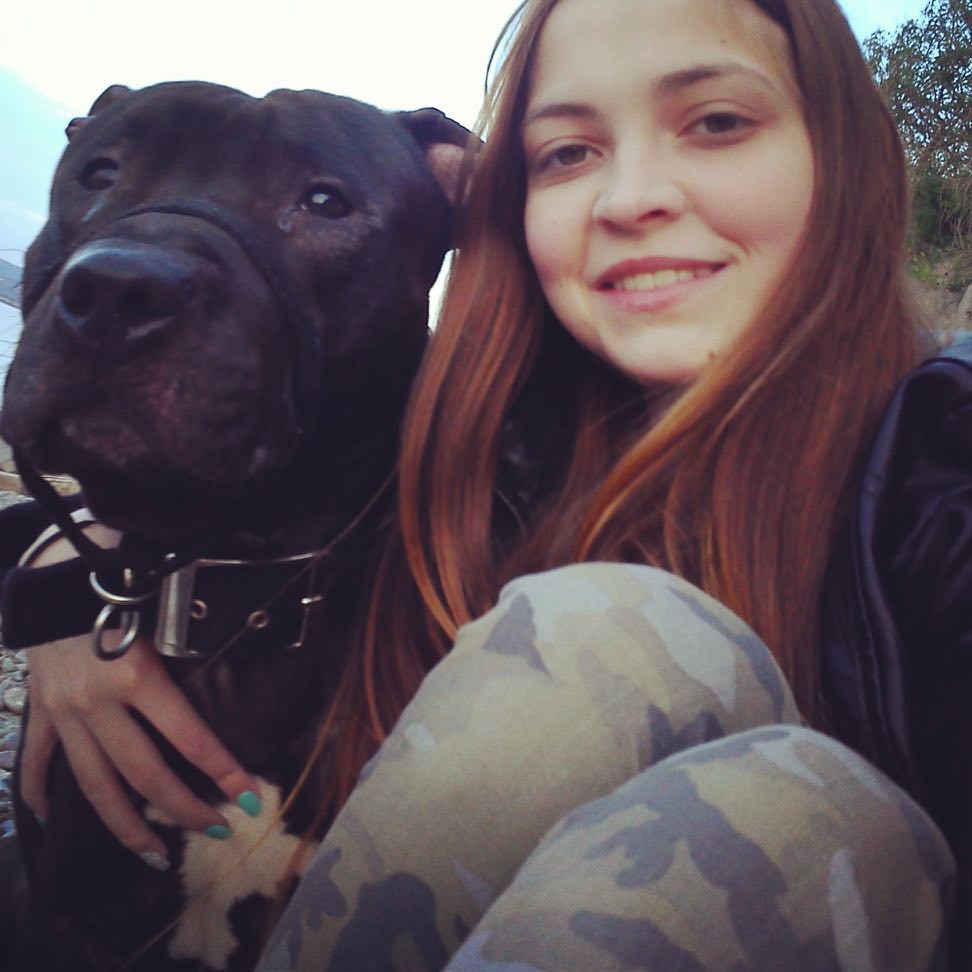 I’ve always had these special connections with dogs. I believe you all at least once met a weird kid that had imaginary friends? Well I was the weirdest of them all. I had imaginary DOG! I wanted a dog so bad that I actually pretended to have one. Of course it didn’t last long and my imaginary dog disappeared in less than 6 months. 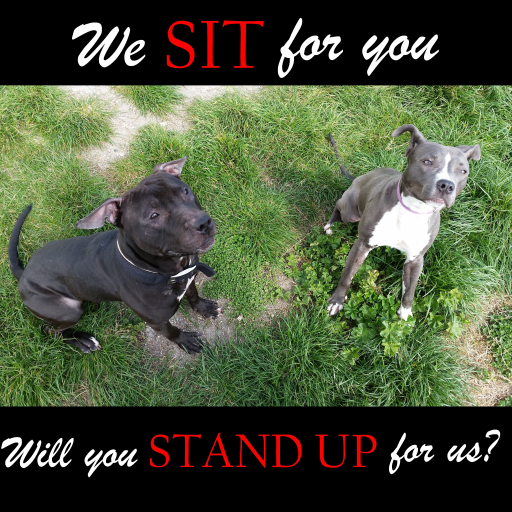 My first real fur love was a rottweiler named Book. His owners lived near us and me and my brother played with him almost every day. He was one of the sweetest dogs I met. But then one day, we came and Book wasn’t there. His owner told us that he had a disease and he passed away. I remember how that broke my little heart. The owner got a new dog really soon, a new rottweiler named Art. He was cute and sweet, but I didn’t have the same connection that I had with Book. So in short time, I stopped going there to play. It wasn’t the same, I guess i still wasn’t over Book’s death. That was the first time I realized how painful it must be to lose a dog. I was so sad that they can’t live forever, or at least longer than us, but that wouldn’t be fair to them. They don’t deserve to feel the pain when you loose someone. Dogs are so much better than people.

Later, when I was 6 years old, I convinced my grandma to get a dog. We went to our local shelter and picked a dog (I don’t really know which breed he was, I just remember he was a beautiful mix). We named him Jake (Jaka in Slovenian). We didn’t know much about his past, but he sure went trough some tough time because he was really scared ad first. He was afraid of everything. My grandma spoiled him so much and made sure everything will be perfect for him till the end of his life. Of course I visited him a lot. He wasn’t as lively as Book, but we had a special connection too. He was mostly my cuddle buddy. We could lay on a couch and cuddle for hours. He really was something special.

Later I started educating myself about dogs. I had like 10 books about dogs and I knew all of them by heart. I liked all the breeds, but my favorite was definitely an American Pitbull Terrier. I was sure that I’ll have one someday but my mom hated the idea. She saw a lot of pitbulls in wrong hands here, so she thought that every pitbull is aggressive and mean. So she said that there is absolutely no way that we will ever have a pitbull in our house.

When I was 10 years old we got our first dog as a family. We had a labrador named Ben. I don’t really remember much about him, because we didn’t have him for a long time. My parents were really busy that time and me and my brother were too young to take care of him by ourselves. So after 6 months we gave him for adoption. We all knew that this is the best for him but I was still so brokenhearted. I thought that I’ll never have a dog again because this experience was just too painful. About 3-4 months later we found out that Ben had a cancer and he passed away. I started to think about how we should make his short life better. We should take more walks. I should make more time for him. I was so sorry that I didn’t get another chance to make things right. Of course, my parents never wanted a dog again.

Things changed in summer 2010, when I was almost 15 years old. I met my boyfriend and he had a beautiful black APBT named Bul. 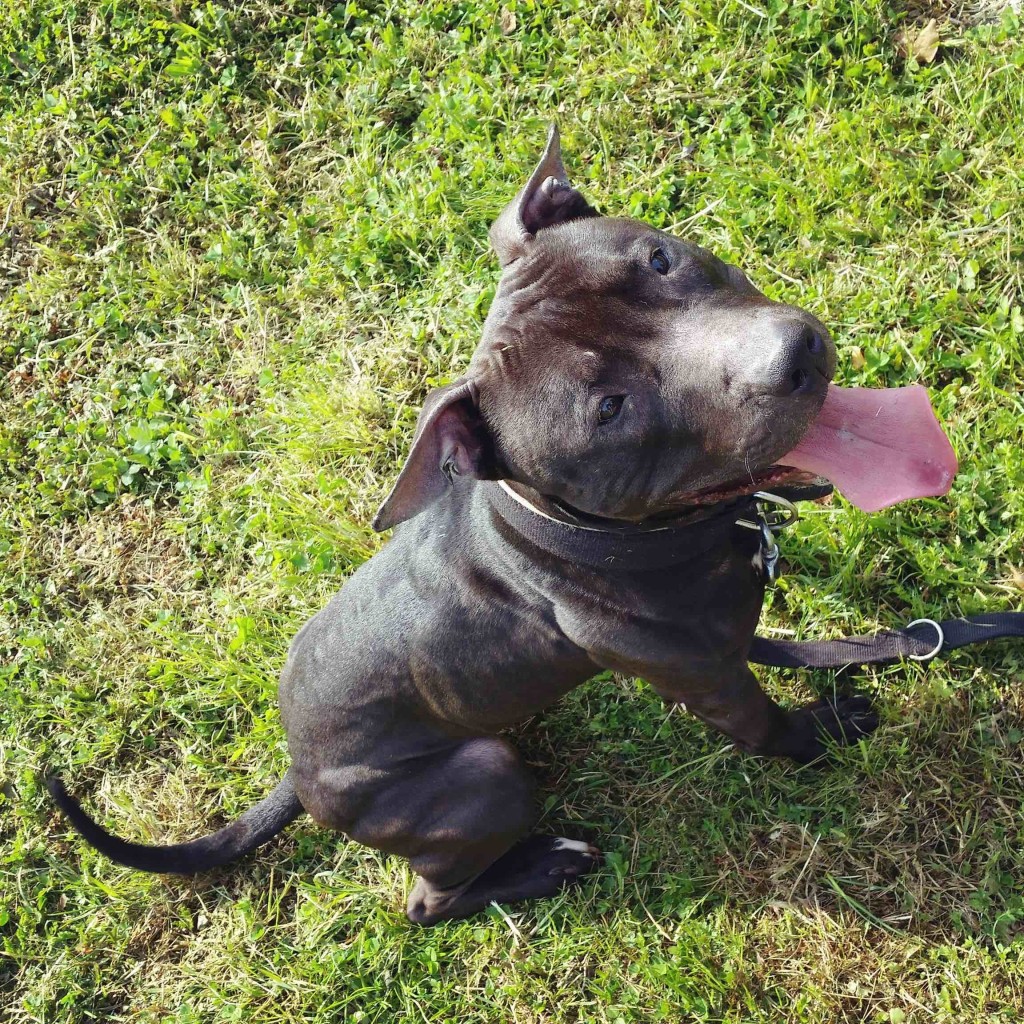 He was about 5 months old and was so sweet and friendly. I fell in love and that moment I knew that I will have a pitbull for sure. I was going on walks with Bul every day. I was teaching him new tricks, I was giving him food.. He became my dog too. I thought that I knew what is like to have a dog. I thought it’s not as hard as everybody else say, I thought it’s only fun and nice. My boyfriend was telling me that I was wrong, that is not as easy as I think, that having a dog is a huge responsibility and that is extremely hard at the beginning. But I didn’t believe him. My wish to have a dog was stronger.

In 2012, Jake passed away. He was old and had a lot of diseases, so my grandparents decided that its best for him to put him down. I remember my heart being broken again but I learned something important: life is short. You don’t get to live forever, and neither is your dog. So, that’s when I made a decision: I will get a dog, and I will take a care of him. I want to make someone’s life better, I want to make one dog happier.

I graduated from high school in June 2014. I got accepted to college and things were going great. I was still taking care of Bul and I wanted my own dog more everyday. So in that summer, I got one. 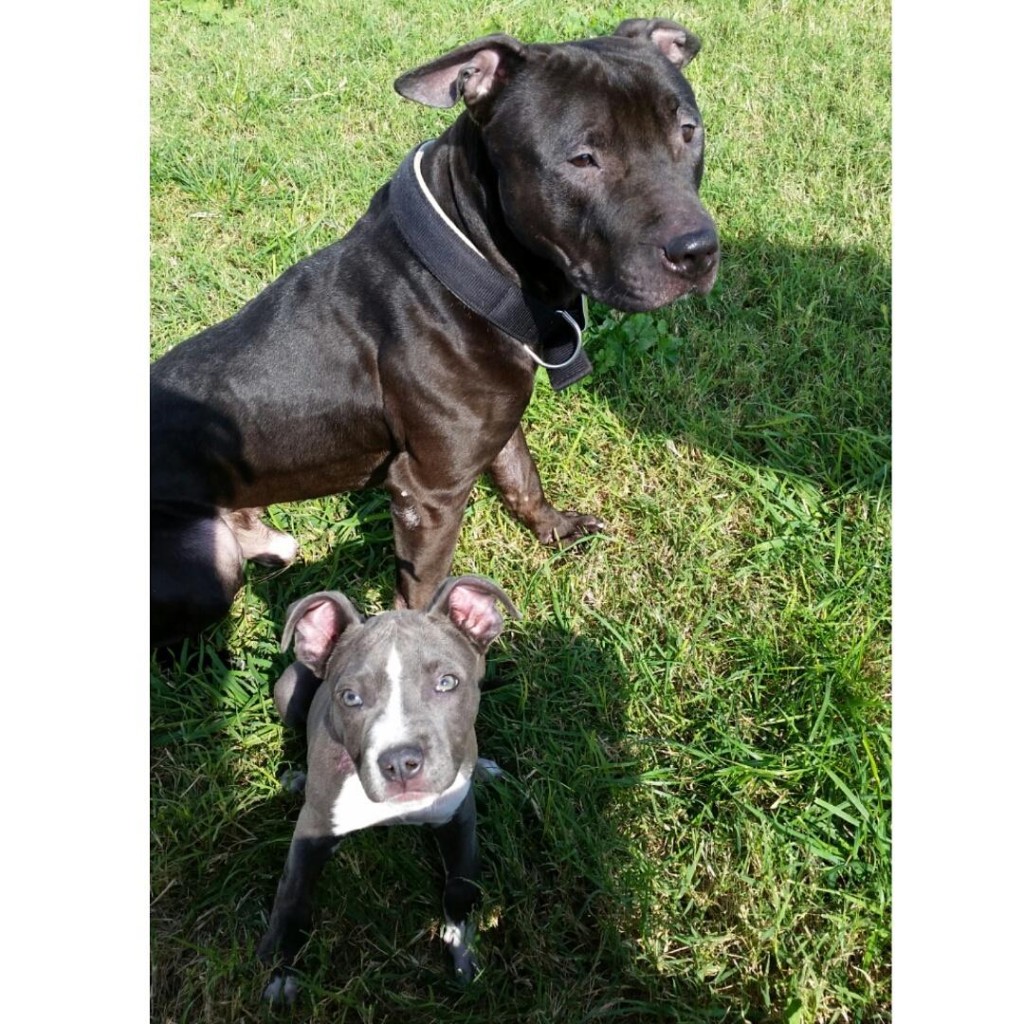 I first met Blu when she was 3 weeks old. She was so cute. She crawled to me and fell asleep in my hands. In that moment I knew she is going to be mine. I felt I was ready to do this. But I was more wrong than ever.

I got Blu when she was 2 months old. She was the most gorgeous puppy I’ve ever see. At first, she was so calm and sweet. But of course things changed. I have to move in with my boyfriend, because my mom said that there is no way she will have a pitbull in her house. Things were really hard for me, because I also got a new job, which I hated, and Blu became a wild child. She was nibbing all the time, she destroyed some things and she couldn’t be calm for more than 1 minute. My job took me a lot of time and energy, and Blu took me the rest. Don’t get me wrong, I loved her with all my heart, but things were really hard. I admit, giving Blu for adoption did cross my mind, but I felt in my heart that this isn’t a right decision. I remembered Ben and his sad look when we gave him away. I couldn’t make the same mistake twice. Not this time!

I went to puppy school with Blu. We learn some pretty useful stuff and she was getting better every day. I have also found a new job that gave me more time to spend with Blu and give her the attention that she deserves. I was visiting my parents a lot so my mom saw that pitbulls can be really friendly and kind. Things were just getting better and better. 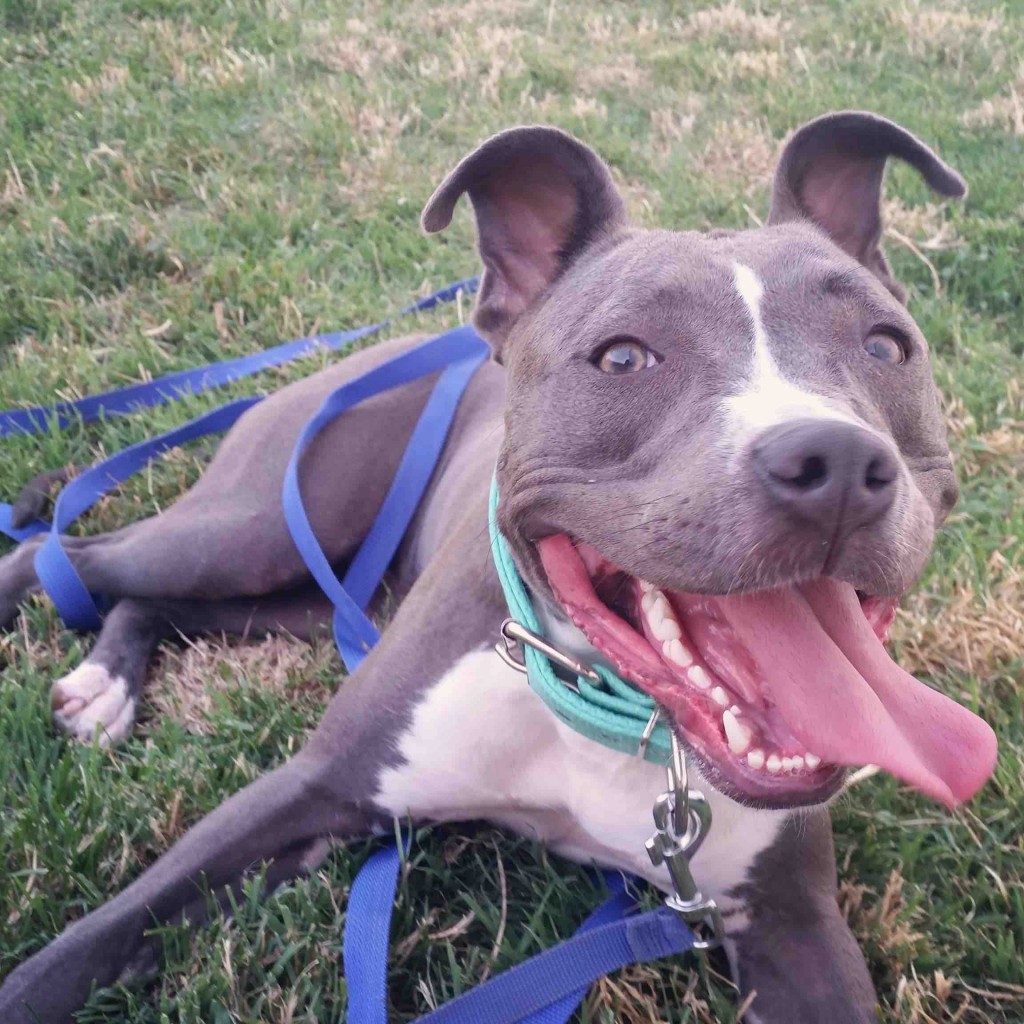 And how are things today? I have 2 jobs and going to college, but I still make time for Blu. We are still going to dog school and train everyday. My mom loves her now, she is petting her all the time and even gives Blu food from her hand. It is still hard, with 2 jobs and everything, but I know now: this is not an excuse to give a dog for adoption. If you are thinking about it, I suggest you don’t do it. I know its hard, but your dog should be your priority. I know some people believe that dogs can’t show emotions, but I know they can. And when I see Blu happy, that is the most important thing. I gave up a lot of things, but it was definitely worth it.

Dogs are the most beautiful, kind and big-hearted creatures in this world. They can teach you to love unconditional, to respect and not to judge others, and what the most important thing is in life. Blu taught me that life is short and we should enjoy every minute of it. And I think you should too. Don’t worry about things. Make time for what’s important to you and work hard to make your dreams come true. Because if I can have jobs, college and a dog at the same time, I think you should too. There is absolutely no excuses for giving up and getting rid of your dog. And I think that, sadly, a lot of people don’t know that and later, they regret giving their dog away.

I hope I changed at least 1 person’s mind, if they are thinking about giving their dog for adoption. This is the biggest mistake you can make and I hope you don’t do it. Its absolutely not worth it, because dogs are the best! 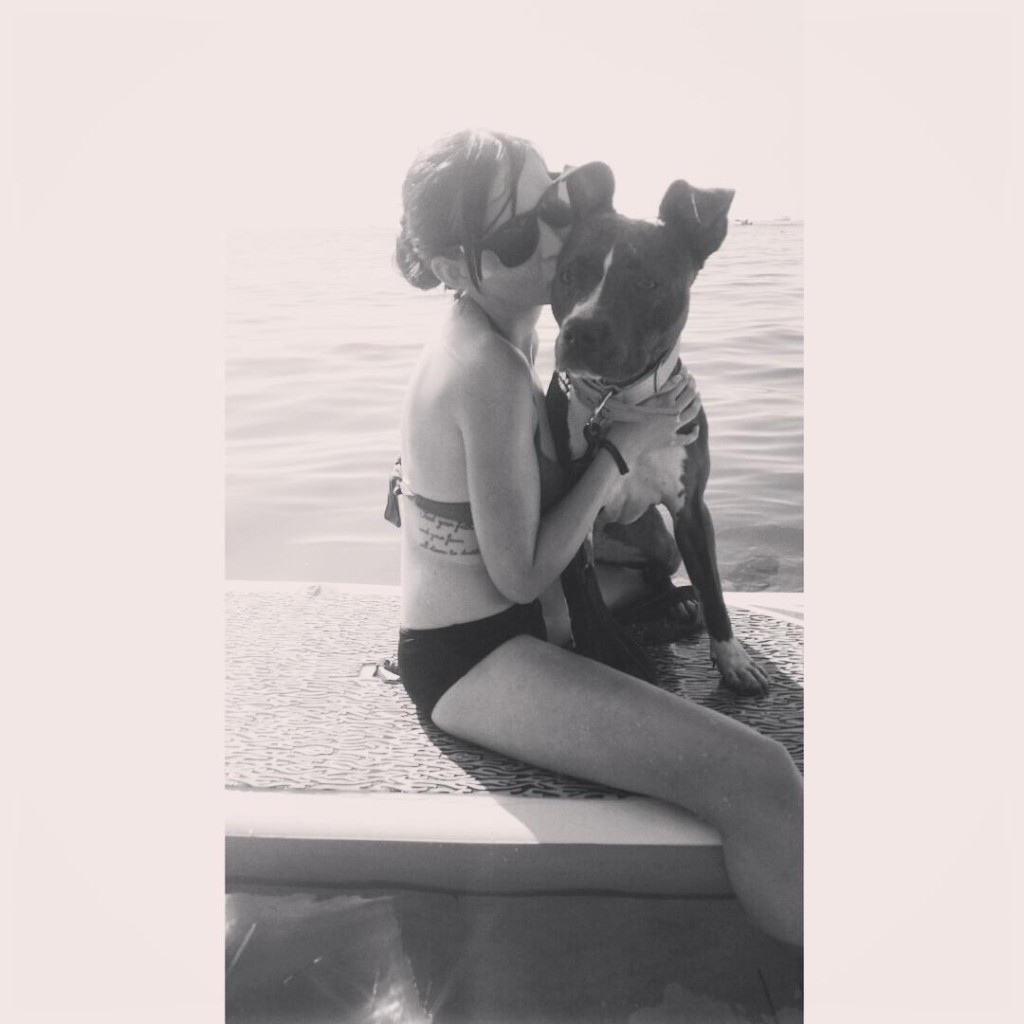 Apologies for my english, it isn’t my first language 🙂

You can follow me, Blu and Bul on IG: @veronnikaas

Create a brighter future for all Lovabulls through the purchase of this custom piece from our Lovabull Market. Click the image below to create one today. 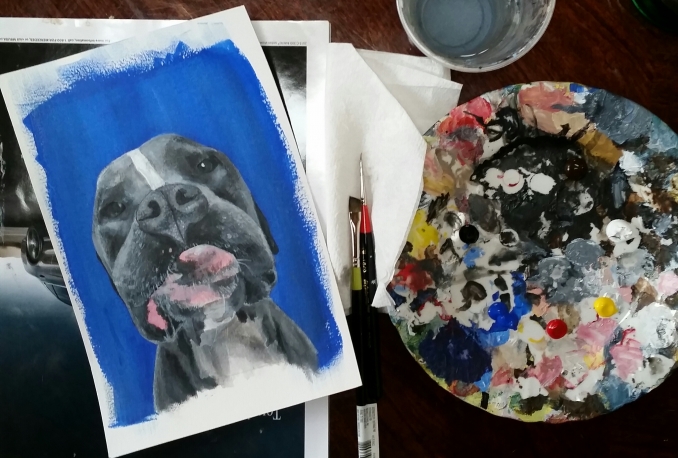