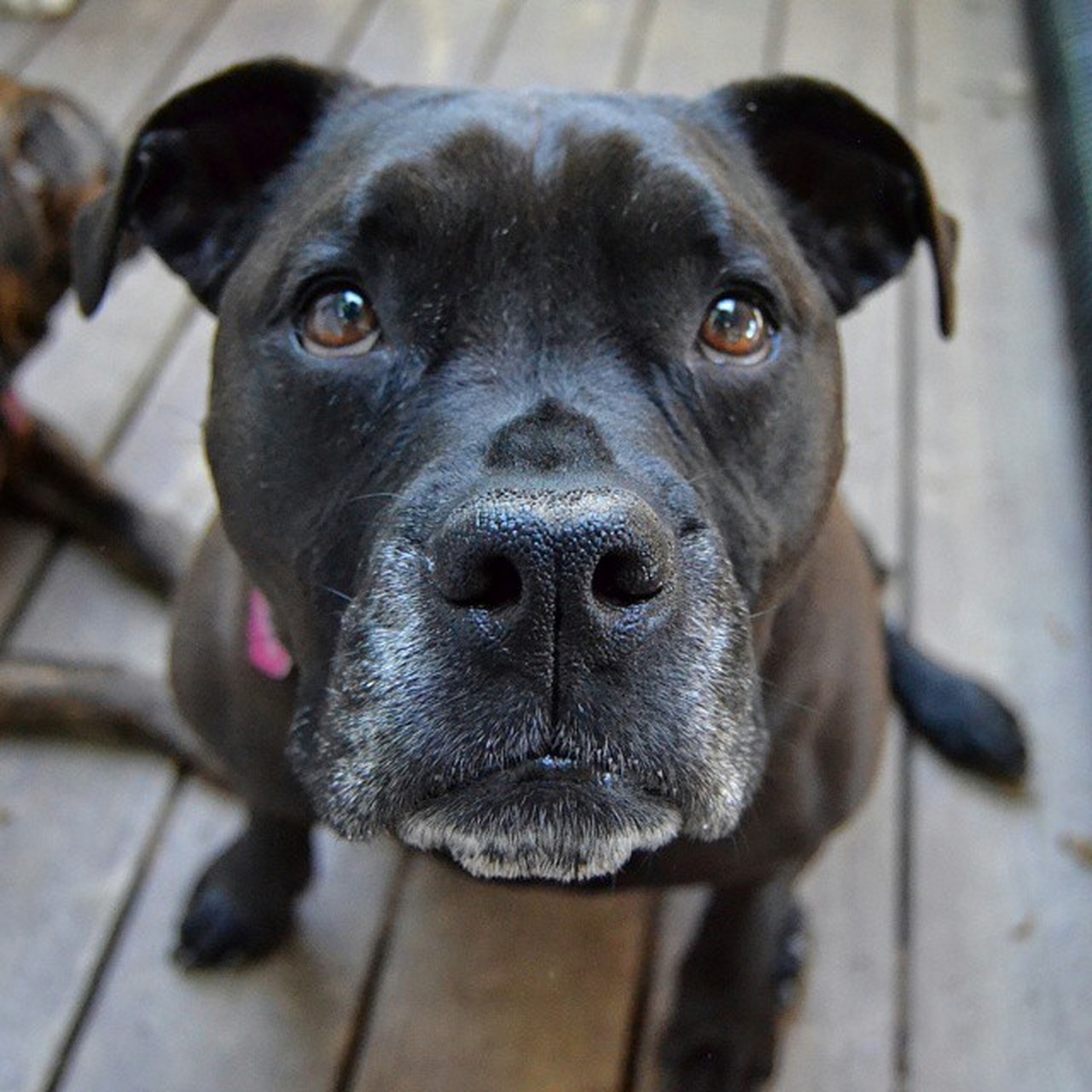 We first got Bella when I was eighteen (7 years ago). She and her siblings were “for sale” in the paper. This was before I developed my “adopt don’t shop” belief. When we called the number, they said they only had one left, and they would give us a discount. We ended up paying $75. That was the best $75 I ever spent!

Bella was a very serious puppy. She wasn’t very playful, but we soon learned that she was very loyal. Even now, when a stranger approaches, she checks our reactions to see if we think they are okay or if she should bark. She happens to favor older people. She always picks out the oldest person in the group to seek attention from. I think it’s because she was born an old, gentle soul. 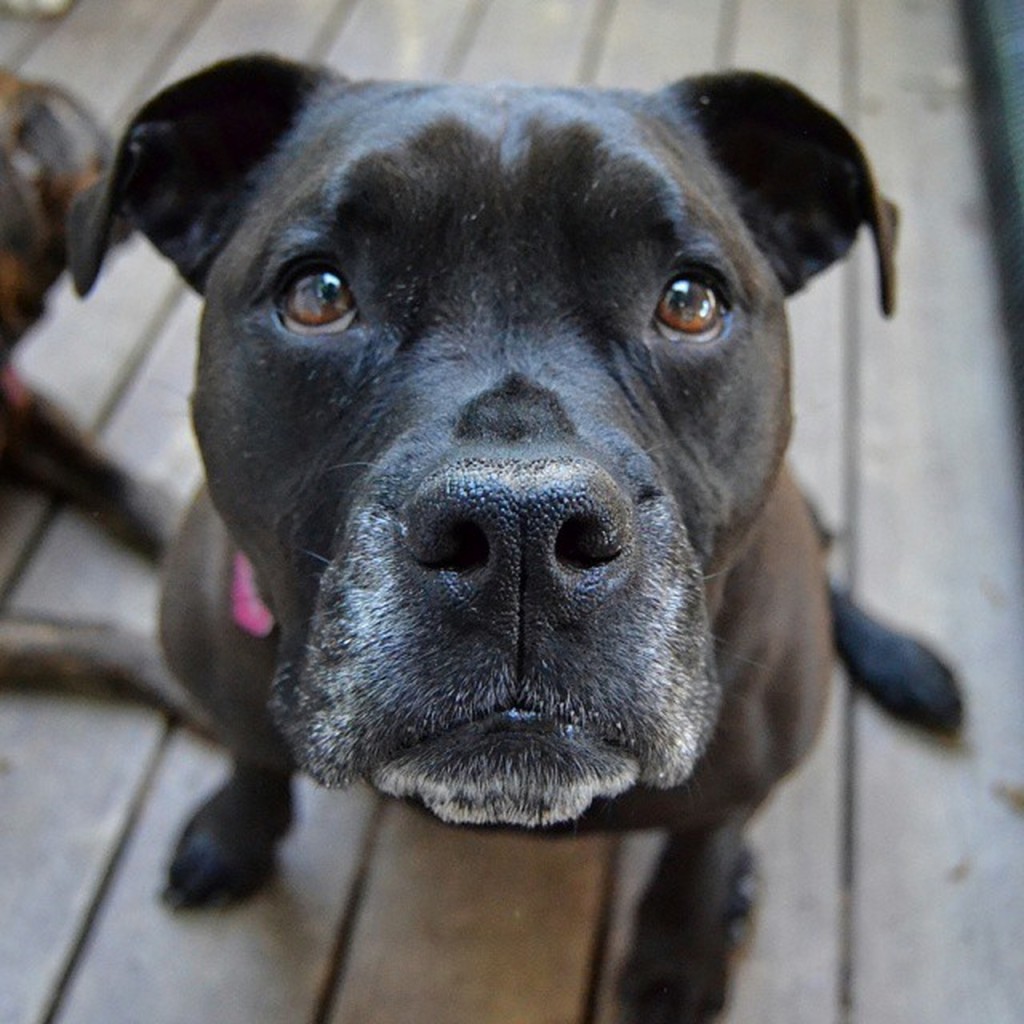 Five years after we got Bella, I was doing my student teaching in Bluefield, Virginia. I had a snow day that day, and I went to the college to turn in some papers. The secretary of the education department said, “Hannah, you have to stay a few minutes and see these rescue puppies.” I agreed to stay because I’m always up for puppy kisses.

The lady that brought them in was a professor at the college. She had taken her trash to the dumpster in the middle of a freak snow storm we had in October. When she got out of her vehicle, an underweight pitbull approached her, practically asking to be rescued. So she did and found out that the underweight dog was also newly pregnant. She was determined that she would find each and everyone of the puppies a loving home. The puppies were brought in and all of them were beautiful. I lovingly held one after the other. I wasn’t planning on taking a puppy home that day, but Opie’s big blue eyes (now green) and vocal manner won me over. I was nervous about introducing him to Bella, but she acted like he was her puppy right from the start. 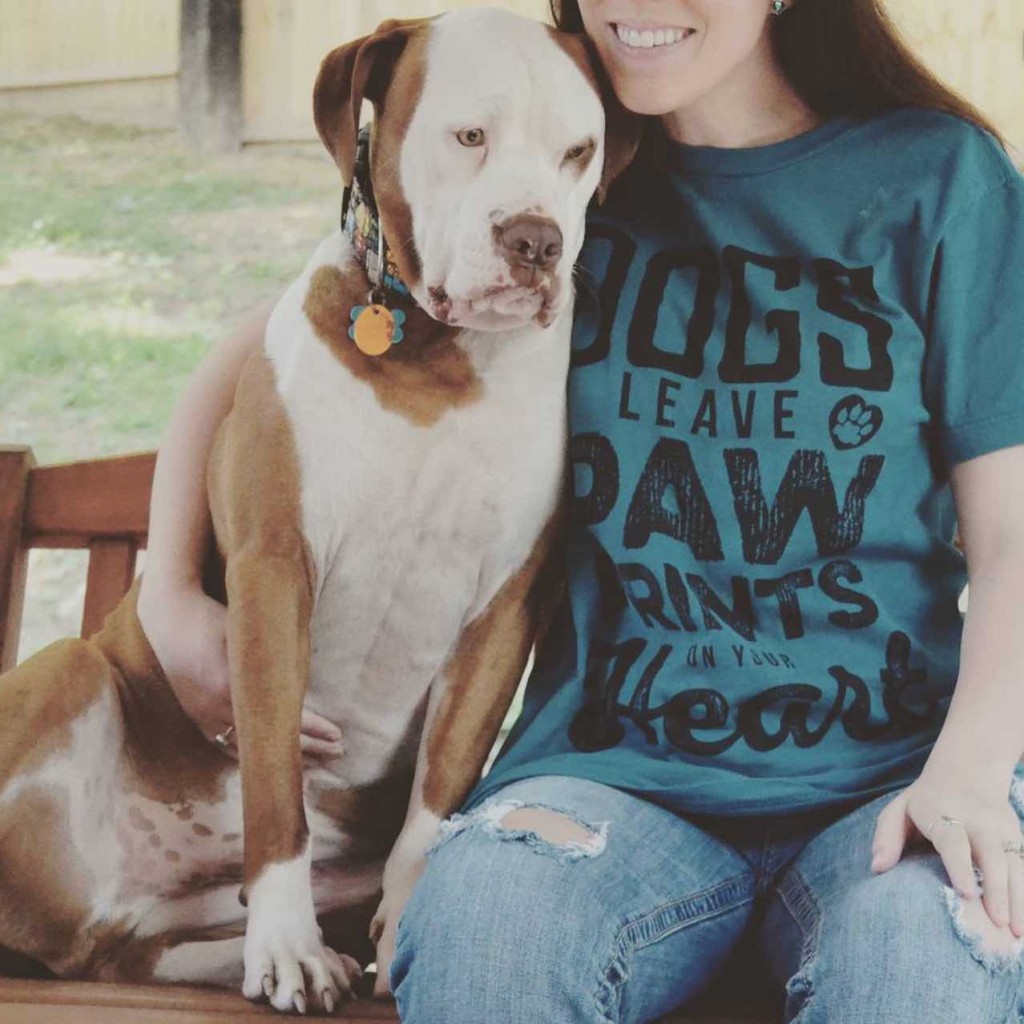 Shortly after that, we had to move because of BSL in Bluefield, West Virginia. The city said that if you registered your pitbull, they would be “grandfathered in”. However, I didn’t feel okay with that. I certainly didn’t feel okay walking Opie and Bella with a muzzle. All other pitbulls would be seized and taken to the shelter. There were a lot of stray dogs – not just pitbulls, but random neglected dogs as well. I felt that a muzzle would leave mine powerless if we were approached by one on our walk. So, we moved. Due to BSL, Mercer Co. Animal Shelter was/ is over run with pitbulls. I felt that I had to do something to save at least one from being euthanized. I sent my husband first because I knew I wouldn’t be able to say “no” to that many sad eyes.

He called me from the shelter. We had decided before that we didn’t want another puppy. Puppies are cute, but they are a lot of work! He told me about this little brindle pitbull that belly crawled her way to him from the back of her kennel. Ember was an owner surrender. The people were moving and decided they couldn’t keep her any more. 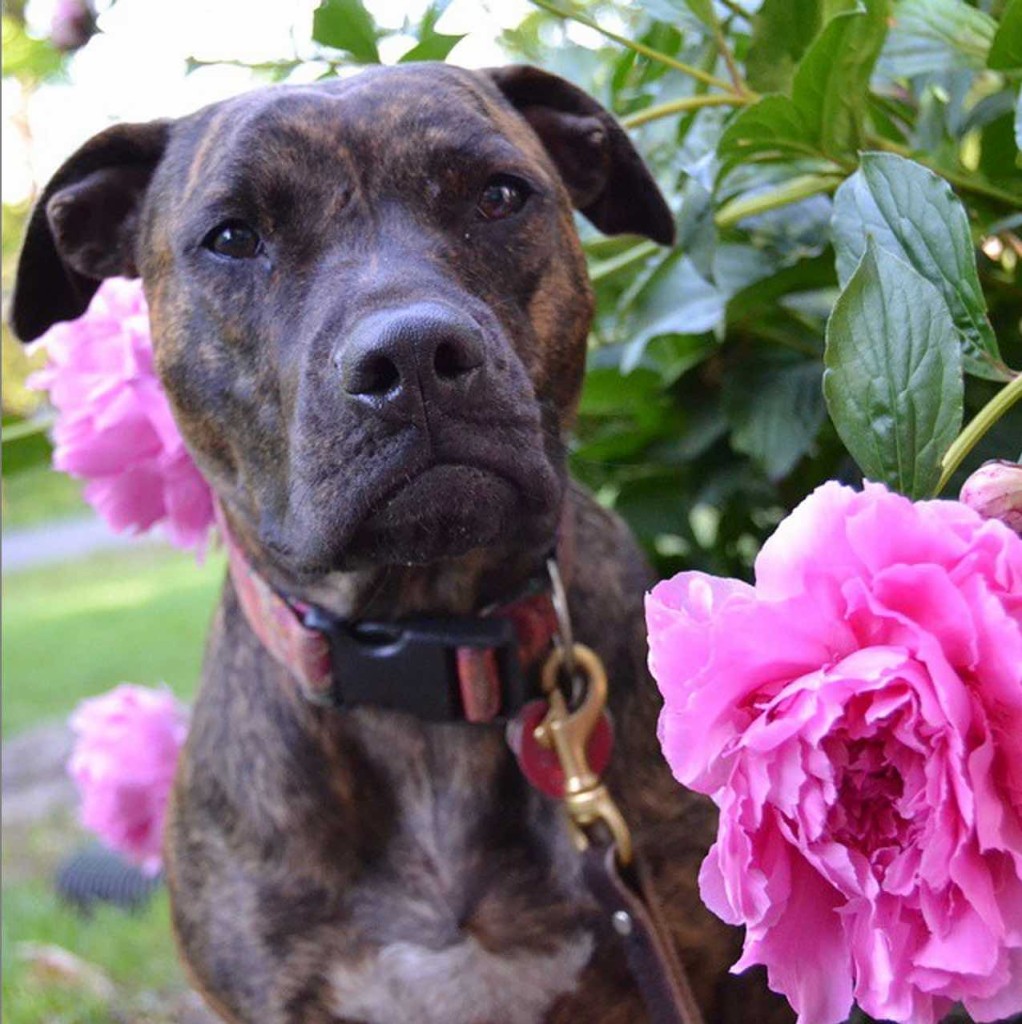 She had tiny scars on her face. I went to see her and my husband and I sat with her in a tiny room. She belly crawled her way to us. If we reached too fast for her, she would shy away, and we’d have to start the process all over again. I went to see her every day until her holding period was up. Belly crawling still continued, but she became so happy when I appeared in front of her kennel.

We picked her up from the vet’s office after she was spayed and brought her home. At first, she was none too sure about Opie and Bella. She would growl and snap (out of fright) every time they approached. Opie finally stretched out in front of her, rolled on his side, and stuck his paw out to her face. The change in Ember’s demeanor was evident. Ember decided that we were safe, and so was she.

Right now, my three are working on their CGCs. The process has been almost a year because they were adult dogs when I started and there are three of them and one of me. However, people are so impressed by how well behaved and friendly they are. They shouldn’t be because pitbulls were born inherently good. 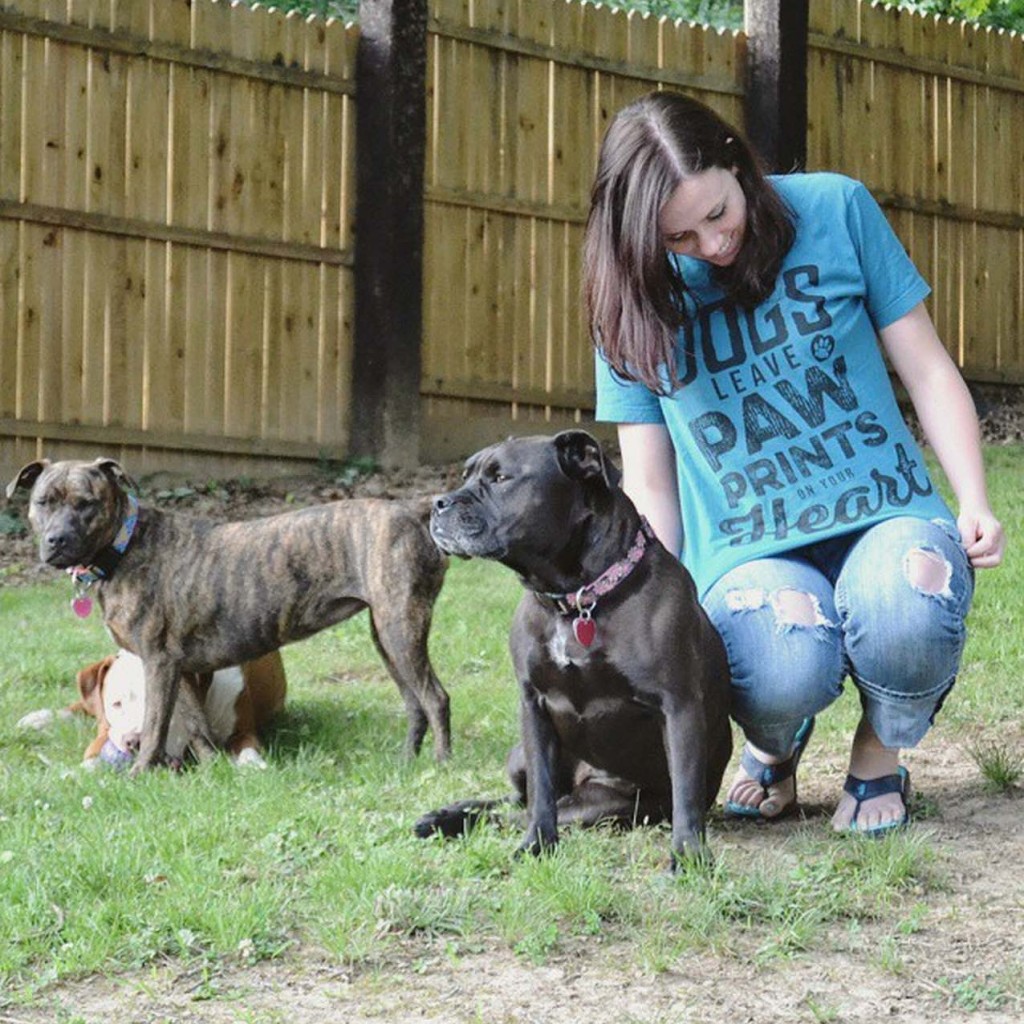 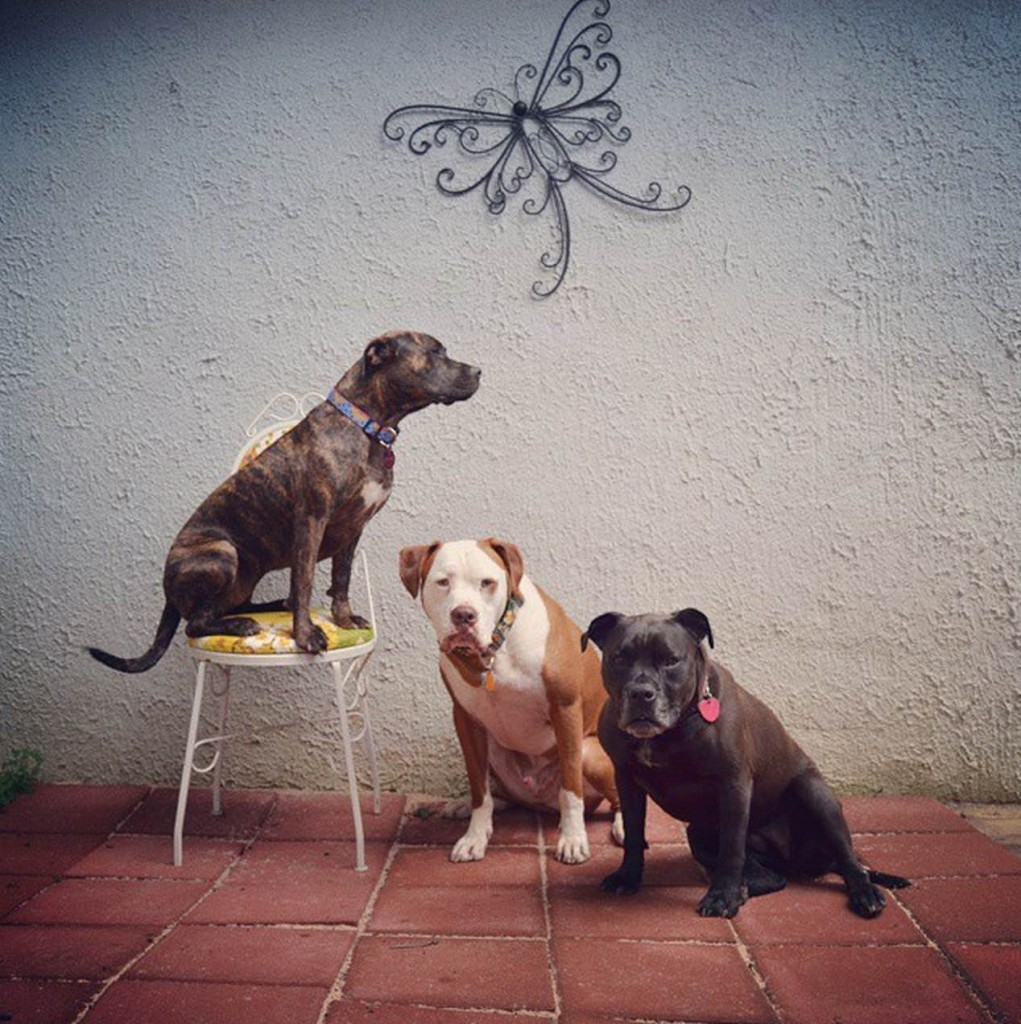 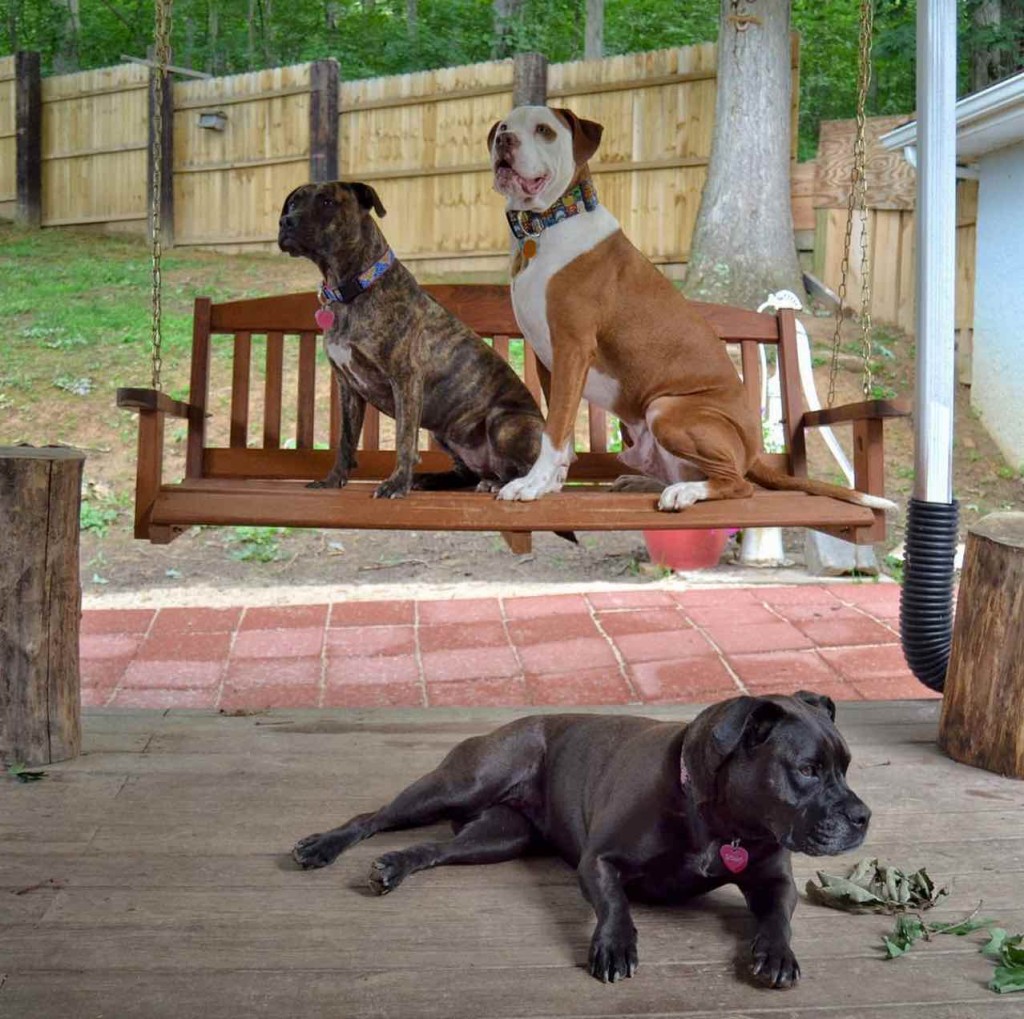 Purchase the great digital art print shown below from the all new Lovabull Market. Click the image below to buy it now for only $15! 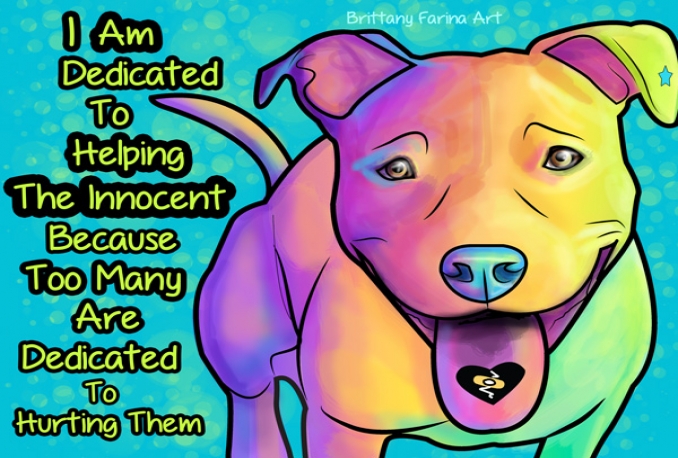